India is considered the birthplace of Plastic Surgery. Since the Vedic ages and the Mughal era various accounts of plastic surgical procedures have been described from the Indian subcontinent. The first documented plastic surgical procedure to be performed in Kolkata was by Dr. Frederick Brett, who worked for the Bengal Medical Service and published a book with detailed images of a forehead flap for nose reconstruction in the year 1840.

The first plastic surgeon, who received modern medical training from England was Dr Murari Mohan Mukherji (1914 – 1988). He was instrumental in setting up the first independent civilian plastic surgical department in the country in the year 1956 at the SSKM hospital in Kolkata. The department was inaugurated in the august presence of two luminaries Dr Bidhan C Roy and Jawaharlal Nehru. Famous hand surgeon Sir Benjamin Rank was specifically invited by Dr Bidhan C Roy to help Dr Mukherji in setting up the department. This was an year prior to a similar department being set up in Nagpur by Dr C Balakrishnan. 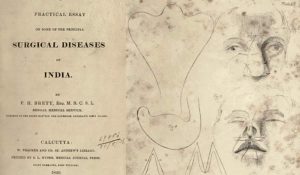